Has anyone had success controlling the AT&T TV set-top box model C71-KW200 properly? When I discover devices on my local network, it finds it as a Google Chromecast-like device (which it is) but does not offer any of the AT&T (DirecTV) controls. I hear this box might have the same IP control features as the DirecTV Genie STBs?

I do have a Roomie IR blaster and I can add the device as an IR device to my setup which works great for everything except using the media-guides to change channels. This device can not have “enter” pressed after the channel numbers and does not switch until the user presses “OK” or the “center” button. Is there a way to tell Roomie that the channel input method is ##-Ok rather than ##-Enter?

Better yet, if there is a way to IP control that is best, but I am 100% fine with IR if I can get the media guide channel change feature to use the correct commands.

Based on your description, it sounds like it probably is just a rebranded DirecTV Genie. Also, the last DirecTV branded box was model C61, so if this is C71, it’s probably about the same thing.

In that scenario, you would just add the device manually on port 8080 as shown on the Compatibility list. You’ll need to figure out its IP on your network and enable the usual additional options as per the list.

Channel switching style is also switchable as per the Advanced setting in Devices.

I also have the AT&T C71 but it is a pure Android box, nothing in common with the Genie AFAIK. I tried manually adding it as Will suggested but that doesn’t work.

I found this quote in the ATT user guide. “The AT&T TV device is a game-changing, proprietary “Over-the-Top” (OTT) device that delivers video and integrated content to your TV over the internet. It enables you to watch online videos, listen to music, use thousands of third-party apps, and play games—all on your TV. It comes preloaded with some Google apps, but thousands of others are available at the Google Play Store.The AT&T TV is used on its own as a standalone device (one per TV) so you don’t need any other AT&T TV set-top boxes or services. (It’s not compatible with any DIRECTV set-top boxes or existing Genie® Servers.) It comes with a remote control offering many features, including the convenience of voice control.”

What I found will work is to let auto discover find it and add it as a Fire TV. It will also add the same IP address as Chromecast device but I haven’t used that in any activities yet. I do use the Fire TV device in my Watch ATT TV activity and it works pretty well. The standard Fire TV keypad covers more of the functions of the RC82V remote. I haven’t tried to use Google Voice yet. The one thing that is missing from the standard Fire TV UI is the RC82V has a button labeled … This works similar to the Options button on a Roku. So if you position the cursor over a show in the Program Guide and hit the … button it brings up a menu of options to Watch Now, Record, bookmark for later, or on some shows Watch from beginning. This is a unique feature of the AT&T TV Guide that I haven’t seen on other Android devices.

So my question is - is there any way to add this command to the standard Fire TV code? Or do I have to delete the Fire TV device and add the C71 manually and learn the IR commands from the RC82V in order to get all of the functionality of the ATT Remote? I have a IR blaster in my rack already with unused repeaters but would prefer to stick with IP commands, if possible.

BTW, here is a picture of the remote from the AT&T user guide. 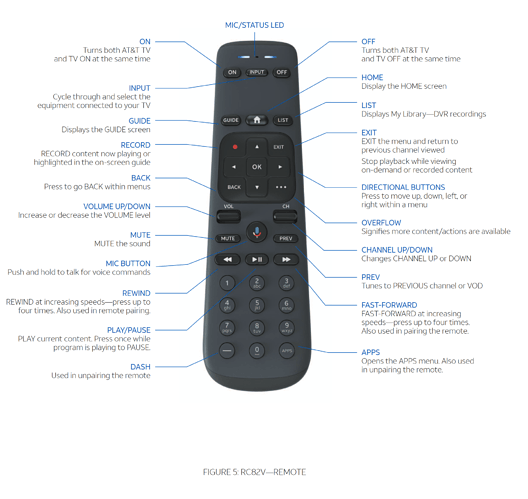