I have decided it’s time to switch from AppleTV to iPad for primary controller. I think the iPad May be more reliable and responsive. The next challenge is which iPad?Anyone have any thoughts on using a iPad Mini 6 (A15 with 4Gb ram) vs iPad Air 5 (M1 with 8Gb ram) for Primary controller? Just wondering how important the extra processor speed and memory on the M1 would be for a dedicated primary controller. Also, how reliable is it to use WiFi for the Primary controller vs. wired Ethernet connection? The reason I ask this is that it seems hard to find a reliable USB-C hub that provides both PD and Ethernet that is iPad compatible.

My advice (remains) to go a little nuts on your Primary. Because you want it to be great in 3 years and replace in 5 years. So you can’t skimp at the beginning or those will be 1 year.

As an example, I just replaced my Primary Primary. It’s now an iPad Air 5. It’s powered by a Magic Keyboard so that the USB-C port is free. In that USB-C port is a 2.5 gbps Ethernet Adapter (attributed link):

It’s really great. Everything is super fast. Lots of video cameras on the Dashboard, etc. Still very responsive. Beautiful networking. What you can skimp on is storage because it’s only running 1 app. The lowest storage is invariably fine. Active RAM can be important though depending on your config.

Meanwhile, if I waited a few months for the new iPad Pro models, assuming they do some kind of 14" model with an M2, that sounds intriguing.

Note that version 7.5 has a lot of improvements to display of video cameras of both the RTSP and HomeKit variety. It’s also much more careful about not overloading the device with too many streams at once. So a 14" iPad Pro as Primary might actually be fairly useful if you have a lot of cameras.

At the low end, I do use some iPad mini 6 models, but only as wall mount or room-based devices, not as the Primary for now. I don’t see why they wouldn’t be great primaries, but I’ve had minor issues to date with them needing a power cycle after about 4 weeks. The iPad Pro and iPad Air never see that issue. Might be just coincidence who knows.

Thanks for the advice Will. I’m puzzled though as to how you keep the IPad powered while using the USB-C to Ethernet adapter?

powered by a Magic Keyboard

I use an iPad Mini 6th gen. Works great, easy to grab off the cradle. But I do like the iPad Air idea, I considered that but thought it may be to big. I now think that’s a great idea. And the keyboard idea, sounds like a great option also.

ekkoville, what do you use to connect to network and charge the mini at the same time? While I hear the ‘don’t skimp’ part and generally agree, since this will be used as a primary sitting in a back closet, and not actual in-use remote except maybe for programming and troubleshooting, i am somewhat reluctant to go the Magic Keyboard route for charging, but having a hard time finding a reliable USB C device that will do PD charging and Ethernet.

I switched from iPod 6 to Apple TV. I did this, because my IPod was configured as a primary and an always on device. Always on because i use Alexa routines for switching channels and powering on and off all devices by voice, using the activities of Roomie. This works very well.

Beacause my iPod needs to be on all the time and on the charger, the battery has swollen and pressed out the screen, witch is also broken. So it’s in the trash now. This is the reason i choose to get a Apple TV.

Yes, I tried the iPod route too years ago, and it worked okay but had a similar battery problem (I think the smart charging on newer devices helps prevent that now but not back then) then switched to AppleTV and it works okay but some glitches here and there, enough to be annoying (but it does have the advantage of built in Ethernet), so now looking at new model ipad. Was hoping to find a good reliable USB C dock that does both PD and Ethernet though. Not many of those and reviews seem mixed.

My iPad Mini is connected to the USB-C charger almost exclusively. That was a temporary solution and the iPort was my go to for long term docking/charging. Seen here https://www.iportproducts.com/ . However the stock for the mini in white has been difficult. Sometimes the charger is in but the tabletop dock wasn’t.

As far as network, it’s Wi-Fi exclusively. Have not had a problem as of yet for reliability.

That’s total nonsense at least with modern devices. Apple has had battery tuning/health capabilities for many years that properly calibrate such things. I have not seen a bulging battery issue since the iPhone 6 era (2014).

That and the “burn-in” nonsense will be moderated out here as neither have been an issue within the range of the devices we support certainly.

I have not seen a bulging battery issue 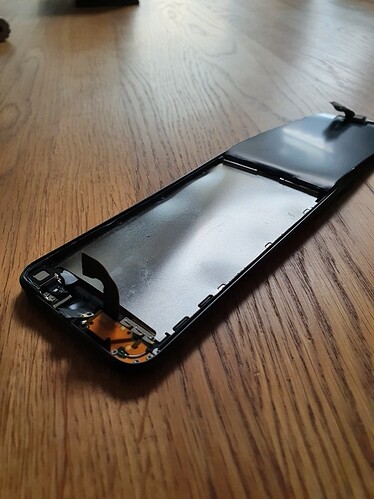 Will, maybe you are right, i know battery management systems are more intelligent these days, but here you are.

iPod 6 (2015). On original charger for about 8 months. Primary device always on and Roomie on foreground, specially bought for this purpose and never used for anything else. Battery pressed out the display. Light was coming out the sides of the alu back. Again, you might be right Will, but for me to expensive to do / risk the same thing again.

I have an iPad, which needs to be portable, for using Roomie and other stuff. I need an always on device for using Alexa. The iPod 6 was just standing somewhere in a corner, just for this. Thats why i choose to get an Apple TV just for this purpose. And buying an Apple TV is cheaper than buying an 2nd iPad or another iPod.

Can you tell me why an Apple TV woudn’t be ok for this setup?

That’s called taking my quote out of context, a tactic used in defense of a weak point. If you add back the words I actually used, it corresponds with what you’re claiming.

Devices get old. Seven year old devices are beyond old. If you’re deciding that all iOS devices can’t be left on chargers because a 7 year old model eventually broke, you’re using data that doesn’t have anything to do with your conclusion.

There is nothing wrong with using an Apple TV 4K 2021 model at this point as a primary except that it uses an A12 chip which is several years old. So you feel like you’re buying a “new” unit, but actually you’re buying something from 2018. And anything less than an A12 is just too low. The prior model AppleTVs use an A10 which is really bottom of the barrel at this point. Definitely not recommended. Quite possible a new AppleTV model later this year so it could be that soon an AppleTV would be an ideal Primary again.

Ah Will, your right, i must appologigize, i see it now, my quote is not correct. I did not do that on purpose. It’s not a tactic, sorry! I am Dutch trying to write your native language. That’s difficult enough…

I rest my case about “old models or charging tech”.

At this moment i bought an Apple TV4HD with an A8 chip. So far it works for my prupose. I bought it for 30 euro’s so thats not so bad for the time being. At this moment i am looking for a new device (A2169) with A12 chip. But i think i will wait a bit and see what will come later this year.

I am noticing much more responsive and faster performance with the brand new iPad Air M1 w/8Gb ram over the Apple TV4K with the A12. There is a weird thing with the networking that I’m trying to sort out with support (despite the wired LAN connection which helps with responsiveness, the WiFi is also required to be enabled on the Primary for the other devices to synch properly with it). What I am noticing though is I cannot close the smart cover on the iPad Primary or it will lock the screen which seems to cause the app to lose focus and ‘disappear’ from the network - other device say they can’t find the Primary (comes back as soon as I open the cover). Wish there was a way for it to keep running normally with the cover closed. But otherwise performance is quite snappy especially on devices that require relay.

App in foreground is a documented requirement on both iOS and tvOS. Was initially also an issue on macOS, but Apple seems to have resolved that over time. In any case, that’s just how iOS and tvOS work – if you don’t see the app running, it’s not. Technically there is a pittance of background time we’re given, but nothing anyone would call “running.”

Wi-Fi can be completely disabled if you have an Ethernet adapter. Any sync issue affected by that is a network configuration problem.